As we all know, Twitter is one of the famous and top Media network world-wide. Users from different regions share their tweets as images, videos, GIF’s, text, etc. Like all the other Social Media networks, Twitter also doesn’t allow any of its users to download video and GIF officially. So, here’s the complete guide to download videos and GIFs from Twitter. 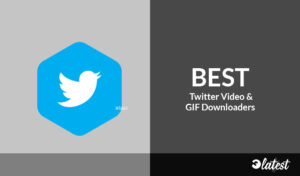 Must See: How to Send Disappearing Messages on Instagram via Vanish Mode.

There are plenty of ways to download media files from Twitter, including Online Video Downloaders, Applications, and some other tools. At first, let’s talk about a few popular apps to download Videos, GIFs, images from Twitter. The below apps are available on Android and iOS platforms, and those respective links are as follows.

It is one of the popular third-party application to download images, GIFs, videos from Twitter. The app has a friendly user interface, and media files can be downloaded with a single tap. The only thing you need to do is to copy the media file URL from Twitter and paste here & give a tap on download. Alternatively, you can also open Twitter’s tweet and Chose “Share Tweet via” option and select this application. Alike all the other apps, it also needs the Android 5.0.

Gifitize is one of the popular Twitter Gifs and videos saver application on iOS platform, allowing users to Send and share GIFS with the Gifitize Keyboard, Convert videos to GIFs from the camera roll, etc. The app supports 9 languages, and it requires iOS 9.3 or later, and it is compatible with iPhone, iPad, and iPod touch. You can follow the below link to download the app.

Any downloader is another popular app on the iOS platform, allowing users to download media content from any social media network. Users can download and share media files with a single tap. You can download multiple media files at once, check your recent downloads, and much more with this app. You can follow the below link to download this app on your iOS device.

It is another app to download Twitter videos and gifs easily with a single tap. Alike other apps, it also allows users to download videos in different resolutions and quality. Apart from these, it also has the Buil-in media player and allows users to share and repost the respective video or gif.

Must See: How to Cast to Fire TV Stick from Android, iOS, PC, Laptop, and Tablets.